«Heart» of the Republic of Sakha: the concept of Yakutsk main square has been defined

On September 25, the Russia Is My History heritage park hosted the final meeting of the panel that was responsible for judging the submissions to the Open All-Russian Competition for Developing a Concept of Lenin Square, and was chaired by Aysen Nikolaev, Head of the Republic of Sakha (Yakutia). The experts chose and announced the winner. It was the TUYMAADA Consortium, headed by the CU Reserve. Other members of the Consortium are Yakutproyekt and LSTK-Proyekt. 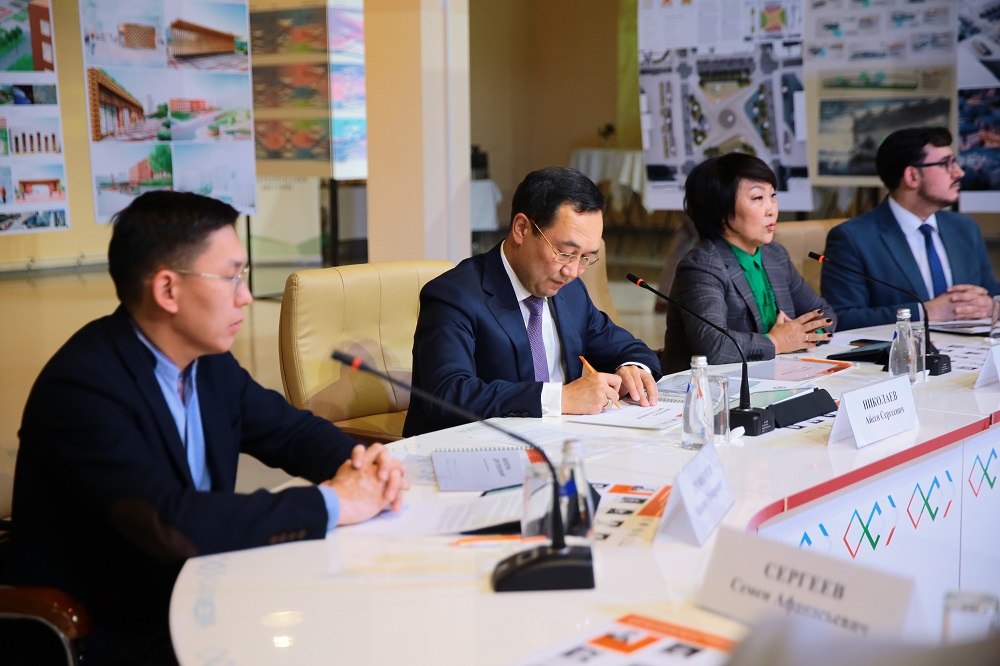 The judges looked at a large set of criteria when evaluating the finalists. The consortiums’ submissions needed to comply with the legislative requirements of Russia and Sakha, and account for the region’s challenging climate. Apart from being unique, they had to be multifunctional. Another criterion was the efficient use the square’s territory, rational design solutions, and, quite naturally, the economic feasibility of funding the project execution. 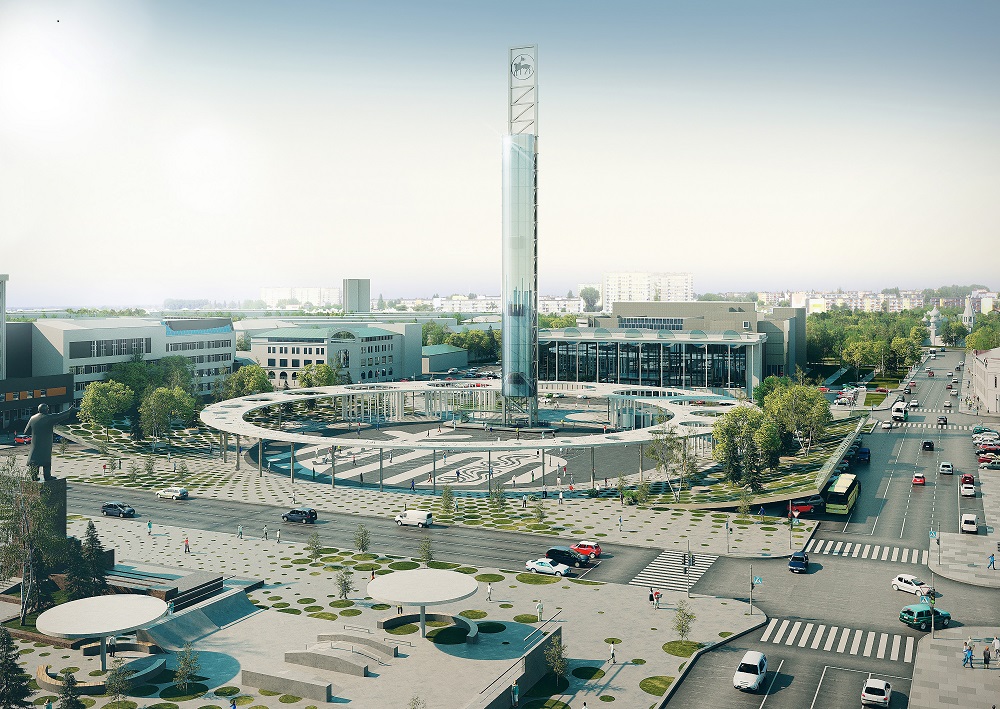 The winner’s title was awarded to the TUYMAADA Consortium headed by the CU Reserve (Moscow). Apart from this company, the Consortium also included two teams from Sakha: Yakutproyekt  and LSTK-Proyekt. Several of the judges noted that the TUYMAADA Consortium had presented an interesting and thoroughly defined concept, based on a combination of two key approaches: turning to the region’s traditions as an inspiration behind a clearly outlined three-dimensional composition; and designing the city administration square to meet the needs of the modern community networks: as a flexible, borderless green space that would actively use the capabilities of modern information technology. The key idea is to build a smart landscape with clearly visible ethnic features.
The square is intended to become a holistic ensemble, integrating the buildings that face it. The clearly recognizable images from Sakha’s ornamental and ritual art will be embodied in a unique installation: a disk, upheld by supports in a few points so that it appears to soar and decorated with a rigidly defined geometric pattern out of round holes of different diameters. This will build a hierarchy of spaces: a large main square with an observation stele and an interactive calendar, which will be located underneath the largest hole in the disk; and framing the square, a “necklace” out of smaller connecting squares, which will be located underneath the smaller holes. This “tolerant” space will be accessible to users with a variety of needs and perfect for all manner of events, from city-wide festivals to smaller community meetings, exhibitions, fairs, and education programs. Such a crucial feature of the project fully reflects the modern requirements for public spaces. 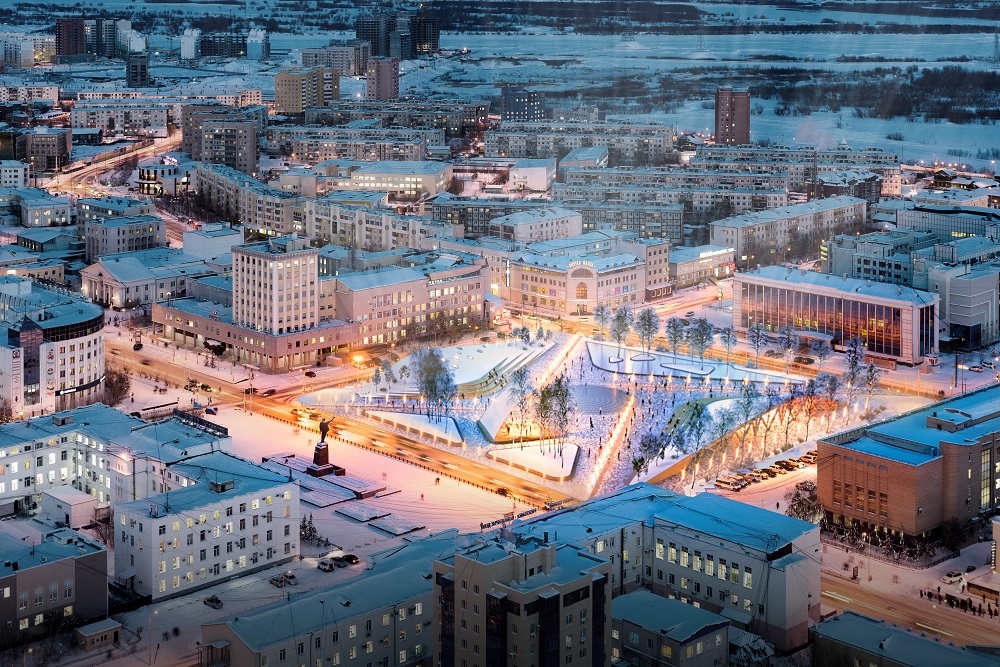 The 2nd prize was awarded to a consortium led by the BAZA14 company from Yakutsk, which also included ASADOV Architect Bureau (Moscow) and S4S/Architects (Kazan). The underlying idea of the Consortium’s project is a synthesis of Sakha’s unique culture and natural landscape. The consortium members suggested that the square be decorated with artificial hills showcasing various plant species from across the Republic. The pavement in the center of the square was to be shaped into a dry deck fountain representing the spiral from the unending Sakha calendar: an image evoking the intrinsic link between the traditional and cultural heritage of the Sakha people and the modern, dynamic Yakutia. 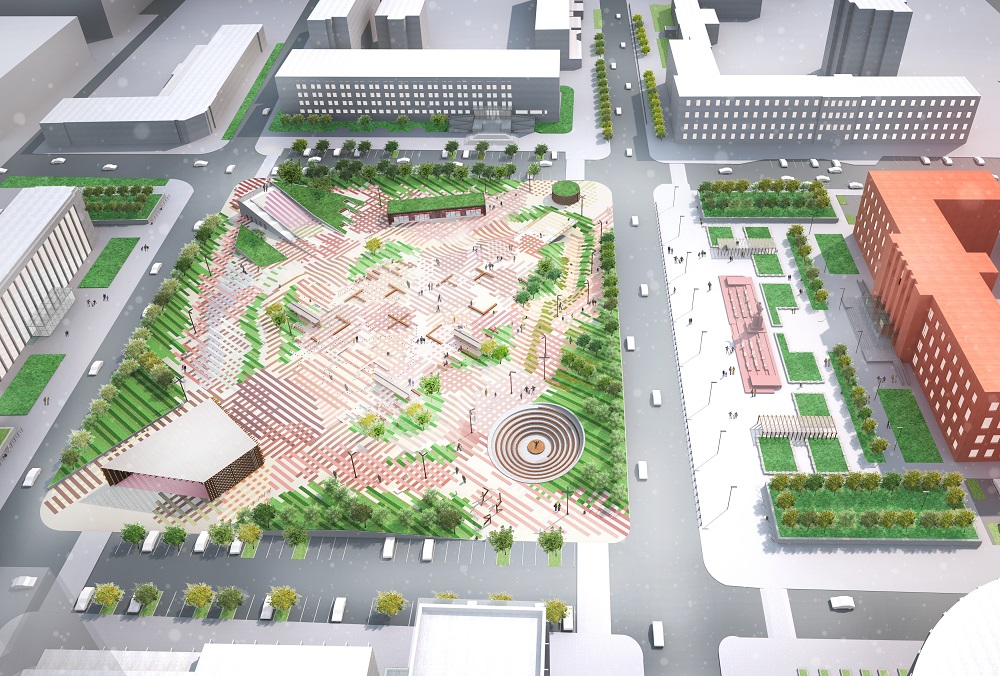 The 3rd place, as per the judges’ vote, went to the May 32nd Consortium, led by the Evgeny Leonov Company, and also including United Riga Architects SIA (Riga), Tatyana Korniyenko (Moscow), BM-projekts SIA (Riga), and Erkin Architecture and Planning Bureau (Yakutsk). The Consortium members’ concept was aimed at turning the square into a meeting place between people and culture, designed as a map to reflect the universe of the Olonkho epic. The Consortium planned for the square to transform into an enormous quilt, woven out of the many mountains and rivers of Yakutia; entwined into that quilt, the contestants envisioned a network of public spaces, such as a climbing wall, an amphitheater, and a fountain. They also suggested surrounding the square with several recreation areas, modeled after the major landmarks: the Land of Yakutia, the Jengish Chokusu Mountain, the Lena Pillars. The developers’ main idea was to make the square speak.

More information on the competition and the finalists’ entries is available on the official competition site sakhamain.space.